On the same day, held at Eastbourne Williams Park was the Eastbourne Local Wild Food Challenge 2020.

There was the opportunity to enter a dish with at least one wild ingredient in an entry of your choice or to come along as a spectator & enjoy seeing & tasting wild dishes created by locals.

The event has been run since 2008, starting with the small contest in Eastbourne, and grown to 7 challenges in 5 countries across the world.

Held on Saturday 26th under beautiful skies, brought the crowds around to Eastbourne in huge numbers. more popular than previous years, with a huge variety of craft stands from local suppliers.

Lower Hutt police said they received a call at 1.00pm after a passerby spotted a car with a man sitting on its roof in the harbour just north of Eastbourne.

A white Nissan Cefiro stationwagon had fallen more than two metres on to rocks near Days Bay Eastbourne.

The crash was caused by driver inattention and speed was not a factor.

The driver, in his 40s, was heading north along Marine Drive when he was distracted and his car left the road at a point before Days Bay. The driver got out of the upturned car himself with only a small cut or bruise on his face, and it is likely he will face charges.

Well I have been aware of this publication “Flying Pickle” for some time, and felt it appropriate to bring it to the attention of residents in the Korokoro, Maungaraki and Normandale Community who were not aware of it, hard not to be as the newsletter ends up in your letterbox.

Unlike my personal rantings on this site about the Hutt Valley it truly is a suburbs community website with the ability of the local residents opinion to be expressed without prejudice. Have a look if your interested in the concerns of this area.

From the site itself:

Flying Pickle is a free community website for suburbs of Korokoro, Maungaraki and Normandale. Our goal is to bring the community together in an open and democratic environment where people can exchange views, news, opinions, advertise their businesses in a friendly and non-intrusive manner as well as find help and support from others.

FlyingPickle.co.nz is where it’s at for people and businesses in Western Hills.
Everyone is invited to post news, views, opinions, whatever you want to share with people around you. The website is completely free, including advertising content. Come, tell us about your business. We want to shop local!

The best of the online content is sent out in the Flying Pickle Print Edition, regularly delivered free to every household around Korokoro, Maungaraki and Normandale. The publication is non-profit and has no more than 1/3 of its space taken by advertising and classifieds to cover the cost.

Give it a go

If you’re in a pickle about something around town, let the community know. We want YOU to get online, spill your beans, and help spread the word on what’s happening in the neighbourhood.

It’s a great place to advertise your Hutt Business too if it applies as a fair percentage of the Lower Hutt City populace lives on them their hills. Go give them a visit.

Dont forget the Days Bay blog of local happenings in Eastbourne as well.

I’m a real Hutt Valley Chick, so I’m more comfortable walking through Westfield Queensgate than native New Zealand bush.  Sure, I’m not an ‘outdoorsy’ type, but I was inspired to get out into the great outdoors this weekend.  Maybe the miserable Spring weather we’ve had so far has driven me to it.  We decided to give Butterfly Creek in Eastbourne a go.  We checked out the Greater Wellington website for the route – and discovered there are actually four different tracks.  One from MacKenzie Street, one from Muritai Road, one from Kowhai Street, and one from the Bus Barn near Burdans Gate.

We decided to take (what GW described as) ‘the easy option’ – Kowhai Street.  We set off just before 1pm on Saturday afternoon.  It was overcast, so ideal weather for walking.  Luckily it fined up beautifully as the afternoon progressed, so we got some stunning views of the harbour looking back at the city.

Kowhai Street may be the shortest route, but it’s a pretty steep start!  It took us about 20 minutes to get to the ridge and then we meandered down to Butterfly Creek – which took a further 25 or so minutes.  So 45 minutes all up.  I wouldn’t recommend doing the Kowhai route on a wet day … the steep start would be very slippery and dangerous on the clay track.

Butterfly Creek is a great weekend activity.  Especially when you’ve got a longing for lovely scenery and bird life.  It’s a great escape from the city.  Next time we’ll do the MacKenzie Road route or maybe the Bus Barn route .  They’re called ‘tramping routes’ … I’m hoping that means they’re slightly longer and less steep!   Will probably go next weekend (weather dependent) as then the walk will count towards my 10,000 steps!  The programme starts at work tomorrow.  It worries me a bit as I walked my dog today – our usual 40 minute loop – and that was only 4,500 steps!!

Thursday night brought heavy downpours across the entire Hutt Valley with surface flooding in several areas including the old Hutt Road reported from early morning. The Open Polythechnic was hit by two slips during the night which sent dirt and trees into the building on its eastern side. Lower Hutt experienced the highest recorded rainfall in the region with 69mm from 8pm last night to 8am this morning. Further heavy rainfall was experienced in late morning as well.

Conditions are not expected to improve tonight with further heavy rainfall forecast in the Tararuas and again across the Valley, late Saturday also has more of the same predicted.

Several events have been moved in anticipation of the weather including the Upper Hutt Highland Gathering a national Scottish festival has moved already to the wet weather alternative at Heretaunga College.

At this stage there is no news on alternative arrangements for the Belmont Spring Festival (returning after a 10 year hiatus) but the wet weather alternative day is 31st October.

Eastbourne flooding earlier in the morning.

Last week, Eastbourne man Greg Dellabarca launched a campaign to have the project abandoned. He believes that not only will there be a massive overspend but the project has the possibility of damaging the relationship between Eastbourne and the rest of the city.

The city council has been unfairly pushed into having to restore the bus barns, he says.
“This is economic lunacy. They [city council politicians] just listened to the ranters and ravers but I never thought it would actually proceed.”

Mr Dellabarca says recent publicity about the project has resulted in “numerous” phone calls from concerned Eastbourne residents who want the project stopped.

Mr Dellabarca (longterm Eastbourne family) has every right to be upset at the council.

HuttNZ has strongly stated its position on this bus barn  (even though it has Heritage 2 status) that the project is:-

Good on Mr Dellabarca for trying to start a petition to stop this project even given his late run. HCC should stay out of all commercial building  developments. The very reason HCC debt sits at 80 million roughly  today is due to the Parking Building in central Lower Hutt in the 1990s and further to that the recent  Daly Street project is testament that their focus should be on essential services not property speculation masked as development.

I hope they listen to the public concerns.

Well the ongoing saga of the Eastbourne Bus Barn moved a step forward yesterday with the Resource Consent being granted by council and announced by Mayor Ogden for building to commence before Christmas.

Mayor David Ogden has announced that the refurbishment of the Korohiwa bus barn is a step closer following the granting of a resource consent.

“I’m delighted the consent has been approved and that the project can move forward.

“This iconic Eastbourne landmark will enjoy a whole new lease of life and revitalise Korohiwa when work is completed.

“The consent gives us approval to fully refurbish the bus barn, restoring it to its original condition and reinstating three apartments on the first floor.

“The bus barn has a category two historic places classification and our architects are working with conservation architect Ian Bowman and the Historic Places Trust to ensure we preserve its heritage value.

“The building consent application will now be lodged and tenders called for.  We expect construction to begin by Christmas.” via HuttCity 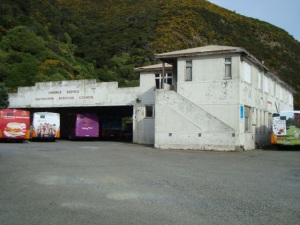 The history on this development is mired with controversy from Councillor Max Shierlaw that the barn was just a sop between the council and Eastbourne residents, when the coastal town threatened to secede to Wellington in the 1990s.

To the issue over the cost which just seems to escalate, with no apparent ceiling in sight.

Hutt NZ agrees with Councillor Shierlaw on this and it does seem to show the council being very cavalier with the ratepayers money, on what after all is a bus barn! Historical or not.

Form your own opinion, but really is this what the HCC should really be spending $2.2 million on, and is property development their role? as Daly Street has shown in the past.

Last word to  the councillor:

Max Shierlaw Western Ward Representative (Normandale) says saving the barn is a waste of money, and wants the council to think hard about spending up to $3m on its upgrade and landscaping the bay.

“Just because its historic it doesn’t mean it needs to be restored” he says. “At the end of the day theres pressure on the budget, and we’ve all these requests for spending. you can’t just keep adding and adding without taking other things away”.

For those residents or the close environs the updates of the Days Bay Residents Association are posted on their site.

This is an excellent resource for the local community and addresses several issues releevant to Days Bay including further insight into sand depletion at the bay, a topic dear to most who visit.

The latest meeting and minutes:-

The latest minutes from the meeting are here