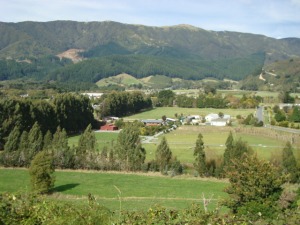 Open day on Saturdays at Upper Hutts Expression Centre (10am to 4pm) will give the public a chance to look at detailed planning options for Maymorn, an area in the Mangaroa Valley, Upper Hutt hosted by members of the Maymorn “structure team” within the council. This development is part of the identified Upper Hutt Urban Growth Strategy (see here: http://www.upperhuttcity.com/page/374/UrbanGrowth.boss)

The area centred around the railway station and defined to the north, south and east by ridgelines and the west by the Mangaroa River will be illustrated by 3 “land use zoning options” which vary in the number of proposed dwellings, from the smallest at 1347 to the largest at 1647. Long term plans include a primary school.

Consultation has taken place with landowners and residents over recent months.

A draft structure plan will then be worked up and used for formal public consultation in the mid-year. Final changes will be made before the plan is formally presented to the council.

The structure plan is a long term planning tool with a time horizon of 20 years or more.

This plan is not without controversy given the areas natural beauty and Upper Hutts projected population growth which is disputed by citizens living  in this area.