I really get encouraged by people willing to give things a try in the hospitality scene, and at present there is a lot going on in Lower Hutt. While most businesses are looking to retrench or have gone into survival mode, I have to tip my hat to these four in trying something new in the Lower Hutt entertainment scene.

Recently taken over by James Thwaites who comes from a background in the hospitality business in Wellington. Major plans are on the cards with a current project to develop a 50 seat dining area upstairs. Also longer term is a 500 capacity band and nightclub venue next door, together with the intention to lauch a One Red Dog upmarket pizza restaurant above the night club. This restaurant will have an outside balcony looking out over High Street. That al fresco concept might also be a feature carried over into the upstairs part of the Loaded Hog. Paul Rowan, of ex Mange Tout is group executive chef. Paul has already changed the existing restaurants menu and the aim is to bring the Stonegrill concept to the new upstairs restaurant upon completion. 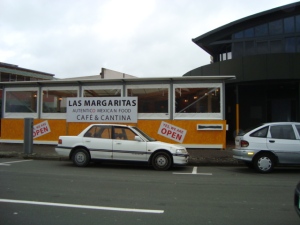 Open about a week in the former Workshop Cafe in Daly Street.

The result of a dream of 14 years by owner Andres Pimentel, is a restaurant that is a combination of Mexican casual and upmarket cusine. Chef Roberto Amaro from Puebla Mexico will be in the kitchen while Andres sister Marina is the maitre’d.

They hope to share their culture through the food and ambience they have created.

Several other outlets are in the planning and while not yet confirmed here are the other two.

Further down southern High Street is a conversion of a former curry joint into Cadillac an upmarket burger outlet. Work is still being completed on fitout.

Mediterranean Food Warehouse
(check out the review on The Med Warehouse here)
Opposite McDonalds in High Street,  this is a further outlet for the Mediterranean Food Warehouse group (Newtown Wellington).
Construction has taken longer than predicted through resource consent delays. Offering hard to source food supplies from the Mediterranean along with a cafe with an upmarket pizza outlet.
It is encouraging that these developments are progresing in the Hutt and offer a greater hospitality experience.
I wish them all the best, and if you know of any other new dining outlets opening soon please let us know at HuttNZ@gmail.com or dm www.Twitter.com/HuttNZ
-41.208429 174.904531

7 thoughts on “Lower Hutt: Whats new in the Entertainment scene”